We briefly touched upon Christmas and it’s origins in our blog post Vintage Christmas Gifts. Midwinter celebrations, Pagan festivals and the Winter Solstice were commonplace, and as Christianity seeped in, Christmas took on a new meaning worldwide. Queen Victorian began her reign in 1837. The Industrial Revolution was in full swing, generating wealth throughout the country and the changes were impacting everyday life. Including a renewed interest in festive activities.

Before this, there were no Christmas cards being sent, no Christmas crackers to pull, and no stories of a visiting Father Christmas.  These traditions, among others, we inherited from the Victorian era. Not surprisingly, they have remained as popular as the beautiful antique furniture they produced.

The Christmas dining table isn't complete without the brightly coloured Christmas cracker. The idea of crackers came about when a British sweetmaker, Tom Smith, visited Paris and was smitten with the way the French wrapped sugared almonds in twists of paper. The Victorian era saw this idea being developed with vintage gifts and paperhats being added. The characteristic 'snap' was added later. 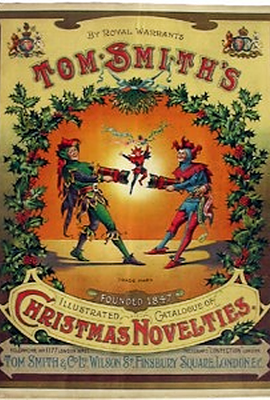 The traditional Christmas dinner was a feast enjoyed by most Victorians who could afford it. Commonly filling meat platters with roast beef or goose, by the end of the Victorian era, roast turkey was the most popular dish at the Christmas dining table.

Winter gift giving is an ancient tradition that dates back centuries. But actual Christmas presents weren't commonly given until the Victorian era, when Queen Victoria's tradition of giving New Years gifts merged with Christmas. Christmas had become a family celebration. Gifts were often homemade and small enough to hang on a Christmas tree, but as the Victorian era moved on, gifts became more expensive as the countries wealth grew and were purchased from shops. Thus came the tradition of placing Christmas gifts under a Christmas tree! 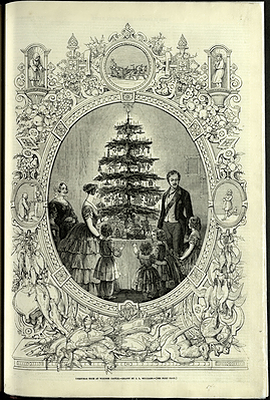 'Christmas Tree at Windsor Castle', from the Christmas Supplement to the Illustrated London News

The first director of the Victoria and Albert Museum, Sir Henry Cole, introduced the idea of the Christmas Card, when he commissioned J C Horsley to design a winter scene for his cards. Those he didn't send himself in 1843, were sold to the public. Also, Rowland Hill introduced the 'Penny Post' to Great Britain in 1840. The tradition of sending Christmas cards to loved ones near and far, began to take shape in the next couple of decades. Penny Post was very simple. A singular, flat rate of postage, you could send a card or letter to anywhere in Britain for a penny. 1870 saw the halfpenny post rate introduced and the postal system suddenly grew, and so did the popularity of Christmas cards. The chromolithographic printing process was improved throughout the 19th Century and festive cards were more affordable for everyone. 11 million Christmas cards were printed in 1880. 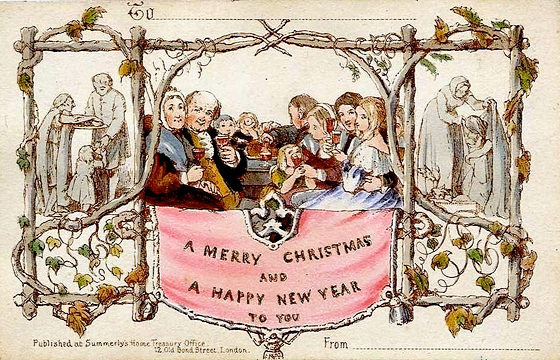 Kernow Furniture - online store based near Redruth, Cornwall. Huge selection of furniture and decorative items. Find many eras and styles of antique, retro, and vintage furniture, homeware and gifts. Fast national delivery offered on all items. Viewings by appointment on 01209 861444.